A Guide to Adapting a Novel Into a Screenplay (Guest Post)

I have always wanted to see my novel on the screen; to visualise characters’ emotions, vivid settings, and tangible objects. So a screenplay idea was always at the back of my head.

I’m going to share with you what I learned along the way when adapting my novel to a screenplay, in the hope it will be of use to you in avoiding some critical errors…

What should I cut from my book?

In a novel there can be many lead up character and story development scenes that are very sensory and observational. Unfortunately many of your most poetic and often best written pages will have to be cut, because they simply won’t work in the film medium.

Go through your story and identify whether or not the conversations between characters are necessary in your script. Are there any stand out scenes that would work well visually?

How to identify good cinematic scenes…

Screenwriting is at its peak when good conflict is involved. Unlike novel writing, you can’t really take the breaks off of your conflict for too long as it will start to get boring and slow the pace of a film.

Pick out some of the biggest and most dramatic moments in your novel and create a beat sheet. Put sticky notes or markers on each page and note down all the ‘filmic moments’ in linear order.

Every scene NEEDS a purpose.

In literature, the purpose of a scene is little more flexible and forgiving. Some moments could be developing a new character (even halfway into the story), some could be warm and heartfelt moments between two friends… But what does that scene accomplish?

You could say, it establishes their bond and future relationship, however this purpose is not justifiable in a screenplay. Motive is a keyword that should be focused on.

If a scene doesn’t have a motive that relates to your main plot, you can most likely cut it.

I’m a very descriptive person, I love details and yes, long sentences. Both in reading and writing. The less the character speaks, the better: there is intrigue, a challenge for a reader and viewer.

“A good film script should be able to do completely without dialogue.” – David Mamet

Andrea Berloff uses minimal dialogue masterfully. What an electrifying moment it is to see a character ‘telling’ it all with just one smile! But that’s not everyone’s cup of tea. And there are industry rules of screenwriting one should follow. Especially a newbie.

If you are going to write dialogue, study the greats…

Aaron Sorkin is the master of dialogue. Contrary to popular advice, he writes a lot of it and his style revolves around his characters talking.

Not many writers (even great ones) can pull off dialogue like this man can, so I would be cautious in your approach. Study his characters, study his work, and most importantly if you are going to write dialogue heavy scenes, take his advice…

Writing in the present tense…

Guillermo del Toro once said: “Screenplay is the toughest form of writing for me because you need to be in the present tense.” Even the greatest writers are struggling.

Another form of writing I use a lot is providing flashbacks. Is it possible to incorporate flashbacks into a screenplay? Yes, it is, however it is frowned upon as it’s always advised to write a narrative in the present tense.

Skipping tenses, past and present can often disrupt the flow of a film. To understand this in more detail, you can check out our other blog; How to use Flashbacks Effectively.

What to cut from your book?

Screenwriting is compression – William Goldman. It’s better not to overcrowd a screenplay with characters, ideas or theories. When adapting from the source material, a writer should think in terms of eliminating non-essential persons or scenes, or sewing them into one prominent idea.

Less really is more in a screenplay and the simplest plots and structures usually stand the test of time.

What screenplay do you want to write?

Does it sound a bit intimidating and limiting? I had this thought several times. And then an “a-ha” moment happened: what if I’m looking at the wrong visual format for my novel? What if it’s not a (future) feature film, but a TV series? 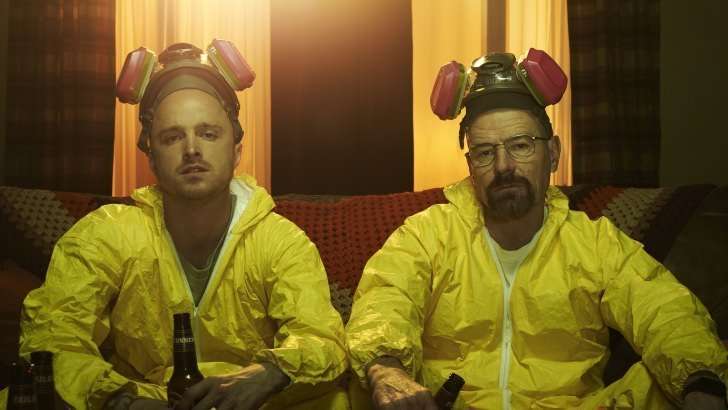 There are multiple characters in my novel, each of them has his/her own story to tell and I’m struggling to cut them. These stories reveal a surprising twist, that changes the initial perception of a given character. I can’t sew them into one person, this will completely ruin the plot.

Now a TV series allows not only multiple (semi-)leading characters, but subplots too. A recent example is Mrs. America with Cate Blanchett as the title protagonist, who connects all other featured stories. Each episode is focused on one or two characters, but they all are ‘sewn’ together via Philys Schlafly’s story.

I have to remember that the final product of my imagination should be digestible not only for readers but for viewers too.

All-in-all you have to remember that the audience are a lot less patient at the cinema and you only have a couple of hours to impress your audience.

Make sure it’s tense, conflicting, funny and don’t be afraid to add in new sub-plots for the sake of the film. Kill your darlings and hack away at your story, if you’re too precious about it the chances are you might not convey your story in its best possible light!